If you have an enquiry about our products and services, please fill in your information and we'll be in touch.

For Sales and Advice:

To suit all temperature probes

An essential tool for autoclave validation

Light duty probe in a wide range of formats

What are the different methods of measuring temperature?

The six main methods of temperature measurement used in industry are :-

What is a thermocouple?

A thermocouple consists of two conductors produced from dissimilar metals. One end of the conductor pair is formed into a junction (the hot junction) and placed in the area to be measured. The other end of the conductor pair (the cold junction) is connected to the measuring instrument. When the two junctions are at different temperatures a small electromotive force (emf) is created. This is known as the ‘Seebeck effect’, discovered by the German physicist Thomas Johann Seebeck in 1821. There are two main International Standards covering thermocouple calibration, tolerance and colour codes, the European Standard IEC 60584 and the USA ASTM Standard STP 407A.

There are several different thermocouple types in use, but the most common are those shown below.

What is a resistance thermometer?

A resistance thermometer consists of a coiled wire of high purity platinum, having a known resistance at a given temperature and whose resistance increases proportionately with a rise in temperature. The most common materials used are copper, nickel and platinum with platinum covering more than 90% of applications.

The two main calibration standards in use with wire wound platinum resistance thermometers are PT100 (providing a resistance of 100 ohms at 0.0°C) and PT1000 (providing a resistance of 1000 ohms at 0.0°C). The coiled wire is loosely held on a ceramic former and housed within a ceramic shell.  Both PT100 and PT1000 are also now available in a ‘thin film’ format where the platinum is deposited onto a ceramic substrate, laser etched to provide the correct resistance at 0.0°C and hermetically sealed with glass. Resistance thermometer detectors are usually mounted and sealed in a protective stainless steel sheath.

The operating temperature range of conventional wire wound PT100 and PT1000 resistance thermometers is from -200°C up to +850°C with a more restricted range for the ‘thin film’ versions of -50°C up to +500°C. Special wire wound versions can be produced for measuring temperatures in excess of +1,000°C for applications on engine exhausts.

Platinum detectors offer a higher accuracy with long term stability compared to all other means of temperature measurement.

What is a thermister?

The majority of thermisters are used in applications from sub-zero to no more than +300°C. Due to the high resistance exhibited (typically 10K ohms at 20°C) by most of these devices, they can measure very small changes in temperature. However their accuracy and stability suffers when exposed to cycling temperatures.

The big advantage that thermistors offer is that because they are in effect a simple resister, they can be introduced into an electrical circuit/bridge with little further modification. An instrument using a thermocouple requires inbuilt calibration data in its memory and one using a platinum detector (although the resistance to temperature is closely linear) requires a more precise bridge.

What is a bimetal temperature indicator?

A bimetal temperature indicator relies on the difference in the expansion coefficients of two dissimilar metals fused together and fixed at one point. The materials are usually formed into a helical coil. The expansion movement of the material with higher coefficient causes the coil to unwind and this movement is transferred by linkages to a pointer on the dial face of the indicator.

These instruments have the advantage that they require no external source of power to operate and can be mounted in remote and hazardous locations. The instrument stem containing the bimetal strip can be supplied in various diameters (from 6.0mm to 12.5mm) and in lengths up to 1500mm. The dial itself is usually available in diameters of 63mm, 100mm or 160mm.

Operational temperature ranges are from -30°C to +500°C with accuracies generally ±1.0°C of full scale.

What is a gas filled temperature indicator?

A gas filled temperature indicator in outward appearance is similar to a bimetal indicator. Instead of bimetal to measure temperature change, the instrument stem is charged with an inert proprietary gas (Filsafe Xylene) or nitrogen. The gas pressure will increase or decrease with the change in temperature which in turn expands or retracts a pressure capsule in the instrument. This movement of the capsule is multiplied via linkages to a pointer on the dial face of the indicator.

As with the bimetal type, they require no external source of power and can be used in remote and hazardous locations. The stem arrangement is very similar to the bimetal type, but they also have the advantage of the option of a capillary extending from the dial case to a short ‘bulb’. This allows the indicator to be located in a convenient position with the sensing bulb mounted at an ideal sensing point.

Operational temperature ranges and accuracies are similar to the bimetal types.

What is non-contact temperature measurement?

Non-contact temperature measurement utilises the radiation emitted by a body in the infra-red spectrum. The sensor of a non-contact thermometer is a thermopile which is an arrangement of multiple thermocouple hot junctions connected in series. This produces a sufficient output in µVolts to enable the instrument to display the measured temperature.

Non-contact instruments are supplied both as hand held devices and as fixed units on production lines and machinery monitoring. They have advantages in that a fairly instant reading can be made and they are ideal for measuring temperatures above 1,000°C. Infra-red temperature measurement is the only successful method of measuring the temperature of moving items, those contained in a vacuum or those within an electro-magnetic such as in induction heating.

What is your Industry? 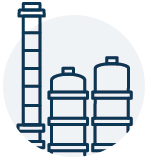 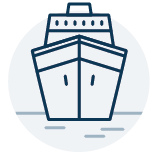 What is your Industry?